The store will not work correctly in the case when cookies are disabled.
Menu

Staplers. Everyone has used one at least once and most likely everyone owns one. They’re used in schools, offices, homes and factories. Attaching stacks of paper and helping enclose packages, staplers are available in many different forms. There are miniature versions, hand-held plier designs, automatic staple guns and heavy-duty variations. We here at Bostitch Office find that staplers are a key element in every work setting and can offer a luxurious experience. Though, we might be biased.

Thought of as such a simple product, staplers had a slow but steady process in development, like most inventions. Once the demand of staplers increased, so did the functionality of the product themselves.

When was the stapler invented?

Before staplers and staples were invented, there was gluing, sewing and wax stamps as ways to attach pages together. All were strong efforts, though nothing held large paper stacks together as a single document.

It wasn’t until King Louis XV requested a better way to tack paper together that the world was introduced to a "stapler." In 1866, the first stapler was born thanks to Novelty Manufacturing Company. With staples made of gold and the unit holding only a single staple a time (1), we could say things only improved from here. (Though, who wouldn’t want pure gold staples?)

Who invented the stapler?

Technically, there is no one person who really invented the stapler as a whole. Each year to come would introduce new improvements.

Simultaneously in that same year of 1866, there was another design being brainstormed and patented that would soon see the light of day. It was a bendable paper fastener (a staple) by a man named George McGill. His invention of a unit that would push the fasteners into paper was licensed in 1867. Just two years later, McGill’s stapler would be welcomed into the market. Though, even then, reloading the unit was an often-recurring task. (1) Patents for McGill's Single-Stroke Staple Press came in 1879, where the machine both injected and clinched the staple. (2)

Years passed in the late 1800s and versions of this invention come about from various people. Though, in 1895, an even more revolutionary machine that we would now recognize as a stapler was developed by E.H. Hotchkiss Company in Connecticut. It used a strip of staples wired together to solve the reloading dilemma. (1)

Where was Bostitch in all of this? Well, a fresh new way to bind books together was invented in 1896. Thomas Briggs created what would later become known as the wire stitcher, binding books using wire. He later founded the Boston Wire Stitcher Company and released the very first foot-operated Boston Wire Stitchers in 1903. Three years later, the Bostitch Model A Staple Binder was developed. This Bostitch product used the first preformed staples on tin cores.

1914 came around and the Bostitch Model AO was produced. It featured a compact design and simplified loading, great for widespread use. Then, in 1923, the Bostitch Model B-1 Desk Stapler was introduced. It had an affordable stamped steel construction and was the first to use a coiled pusher spring. The development of the first strip of easy-to-load "cemented" staples (standard staples) came a year later in 1924.

An even simpler reloading design came in 1937, almost 70 years after the first stapler emerged. Stationary wholesaler, Jack Linsky, created a design that would allow users to simply open the top of the machine to insert a row of staplers. (2) As you could guess, the business of staplers only grew from there.

And after that? Well, Bostitch has since been working hard to deliver consumers staplers that are high quality, easy to use and affordable. We’ve even combined multiple products in one, like the 3-in-1 Dynamo™ stapler that includes an integrated pencil sharpener and a staple remover. Curious about our company's full past now that you've heard about the history of staplers? Check out our history page here!

NEXT →
How to Unjam a Stapler 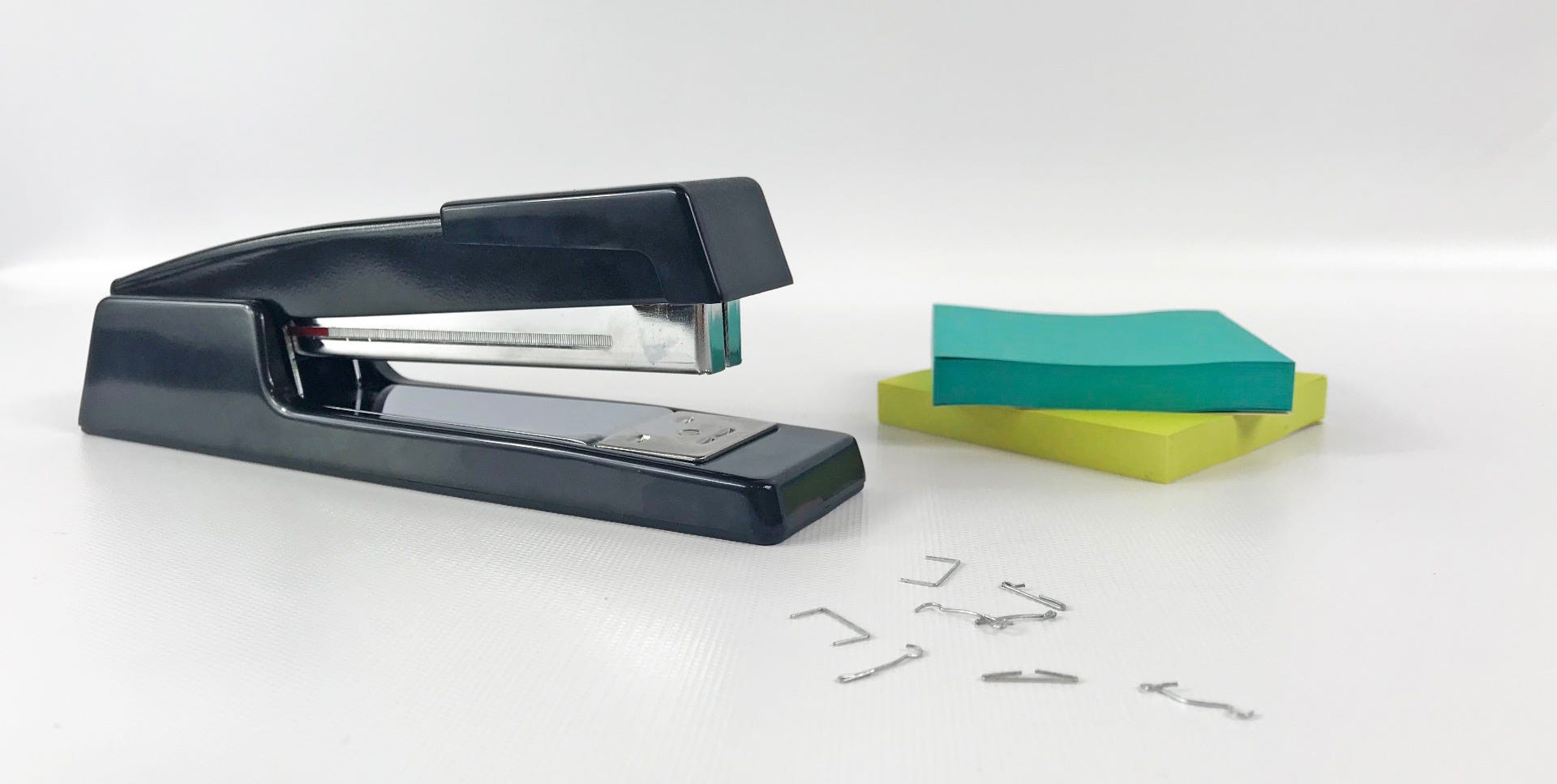